The challenge of Advancing LGBT Rights Protection and Enforcement in Belize 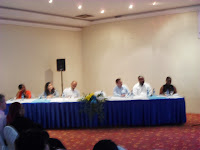 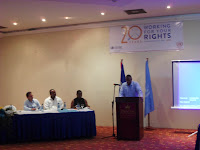 Yesterday, UNDP celebrated International Human Rights Day. The guest speaker was current Bar
President Eamon Courtney (seen on the right) who spoke about the broader issues of functional impunity. As the current dialogue about rights protection and enforcement continues for LGBT citizens, his speech broaden the audience understanding that human rights discussions has broader implications for existing human rights systems. In his speech he shared:

"The Judiciary in Belize is challenged. It remains underfunded and understaffed. Three years ago, the Supreme Court was staffed by a chief justice and eight puisne judges. And yet, this complement was unable to cope and a backlog... Today, through promotion and attrition, we have only the Chief Justice and six puisne judges.This is a critical situation that demands urgent attention. Three years ago there were five judges hearing civil cases including constitutional claims. Today there are only three. A denial of access to the Supreme Court for the prompt determination of constitutional claims undermines the guarantees enshrined in the Constitution..."


"A recent study (unpublished) of the Kolbe facility revealed some startling details. There are interminable delays for persons on remand awaiting trial – in one case of up to seven years. Thirty-seven percent of the prisoners are awaiting trial; not yet sentenced. Of the 183 foreign inmates 71 are awaiting deportation hearings. There are six persons detained in Kolbe who have been found to be insane or deemed mentally unfit to stand trial. In the most egregious case, a person stood trial for manslaughter in 1976, aged about 20. He is held in a cell of his own in a unit housing other inmates with mental health problems. He was found to be insane and has been kept in prison ever since, for 37 years. Unless the judicial system is able to provide effective relief to all persons who are incarcerated, the hope and promise eloquently expressed in the Universal Declaration and the Constitution is as if writ in water."

He goes on to remind the audience about the importance of system strengthening where he speaks of Civil Society long history of rights advancement. He shared;

The history of human rights advocacy in Belize has in large part been written by non-governmental organizations like the Human Rights Commission of Belize, the National Organization for the Prevention of Child Abuse and Neglect and the Women’s Issues Network. It is neither sufficient nor is it right for the burden to carried by civil society. It is high time that we move to the creation of a properly staffed and funded institution for the promotion and protection of human rights in keeping with the Paris Principles (2003). We already have the Office of the Ombudsman. But it has met with measured success. All of us have a duty to advocate for its strengthening. And I daresay there is a need to expand its remit and powers to effectively address allegations of human rights violations. "

I could not agree more with his statement, but what is not lost as an advocate, is observing how many in the system are complicit, by indifference, inaction or omission who willingly allow, systems to remain weak, rights violations to occur, and rights protection and enforcement for L.G.B.T citizens to be ignored or be negotiated away for the sake of political convenience. This picture of below represents the delicate balance between political considerations and the absolution of constitutional responsibility. To me it is very simply, the nation of Belize created and approved a Belizean constitution that speaks to the dignity of the individual and their inalienable rights. Yet, many have shirk their responsibility from that ideal. 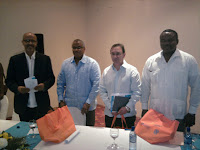 Courtney was rights as he quoted Mandela “Our single most important challenge is therefore to help build a social order in which the freedom of the individual will truly mean the freedom of the individual.” After 32 years of independence, however, we have not gotten it right, and are still saying we need more time to address L.G.B.T citizens needs.So what should L.G.B.T citizens do as they are harassed on the streets, discriminated in education, workplace and family. How much patience should they have when violence is perpetuated and individual symbols of the state decide to violate their rights along with other non-state actors? By silence, do we allow our rights to be negotiated away as a community or do we watch as politician speak of more time?