The Coalition,Belize:Against the Odds at the DR OAS General Assembly


In 2016 fundamentalists clash with our LGBTTI Coalition in an anti-climatic way at the OAS General Assembly meeting in Santo Domingo. They appeared in droves on the street, but in response, as a member of the coalition, I decided to take pictures of them in the background in defiance of their overwhelming numbers with a simply message, "Zero Discrimination.' I cant say the OAS LGBTTI coalition was surprise to see the numbers, but I can say that the numbers reminded me of our experience in Belize, 2013 when the so called 'constitutional marches'  was organized across the country.

In 2013, we saw fundamentalists influenced by Belize Action, organized themselves in the South of Belize with close to 2,000 people walking on foot, with a hanging effigy leading that march. It was through Se la Vee, a virtual forum on social issues that  allies and community members learned of the effigy through an uploaded cellphone video. It was strongly condemned by then Minister Lisel Allamila and many others in the community as bordering on hate. The odds were not in our favor to be able to organized a march that large, but allies and community member remain defiant in their position that Belizean fundamentalists were wrong in having the effigy leading the march. 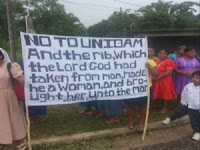 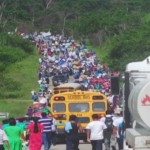 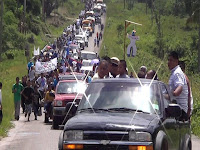 The Channel five story of July 11th, 2013 reported on the issue," The lynching of an effigy depicting one or, symbolically, all members of the United Belize Advocacy Movement (UNIBAM), during a pro-constitution march held in Toledo last Friday, has raised grave concerns." Realising, too late, that the effigy was bad public communication that promoted an imagery of violence, Belizean fundamentalist  distance themselves. The coverage done by Western Vision highlighed the point in it's report,  "..Three of the participants in the pro-Constitution March, BelizeCan, Belize Action and Rise and Shine, have issued a statement regarding photographs purporting to show the hanging in effigy of UNIBAM...' and goes on to say, “We strongly condemn and discourage the use of such placards or images which can be perceived as sending the wrong message. We encourage Belizeans to exercise their right to rally in a respectful, responsible, and God-fearing manner,” said the statement.   Louis Wade, the owner of Plus."

We were glad our opponents made fundamental public communication mistakes because it provided evidence of homophobia and that discrimination and hate was real. We fought back in the timely release of a report called Dangerous Liaisons and got our opponents to admit that they were working with right-wing American groups. The New Seven report made July, 29th 2013 states, 'He does admit that ADF and C-FAM has provided advice, legal assistance and strategy, and he says quote,“they are assisting in cases all over the world in the homosexual global attack on morality & family values.”' The argument of a foreign Agenda was reversed unto our opponents for the first time.

The theme of social defiance in national advocacy, as we experienced in Belize,  reflected the current extended left and right push and pull in many international spaces. The OAS General Assembly, is no different, in fact, opposition and counter-engagement strategies in the norm at the OAS. When we found members of the Coalition being prevented from using the public bathroom during the General Secretary Dialogue, members naturally protested against the indignity. It helped to have the media there to cover their concern and it helped to learn the following day that there would be gender-neutral bathrooms at a coalition meeting. 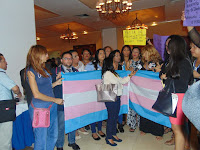 When we found ourselves in a room where fundamentalists outnumbered our coalition members 2 to 1, we were not having it. As a result, members and allies alike came back swinging with signs.Yes, the fundamentalists were out in droves, what we did not have in numbers we made up in spirit with our Jamaican colleague signs leading the way, which said, ' End Religious Extremism!' and 'Religious Extremism Kills!" and 'Protect my Gay Family'. Our coalition added their two cent with trans flags and signs as well, while other coalition members had their own signs like 'LGBTTI are Humans Too!' and held up, 'diverse families.' Signs and sounds began to bloom in torrent of organized chaos at the Secretary General OAS dialogue, but at least it was respectful. 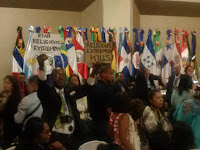 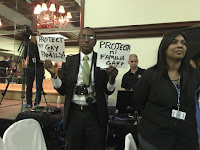 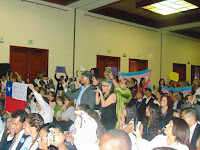 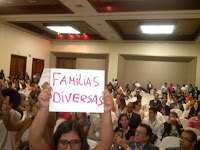 The fundamentalists came back at us through their speakers and signs like ' no gender ideology.' They used working groups to lay down their positions and they sought to shut out the coalition from participating in the General Assembly process. In fact, we learned from one of our colleagues from Guatemala that the bathroom incident form the basis for arguments of exclusion of the coalition from engaging with ambassadors during the Permanent Council process. A fact, we learn a day later after the coalition engaged representative of the Inter-American Court. 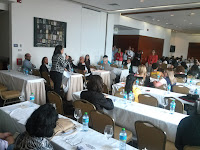 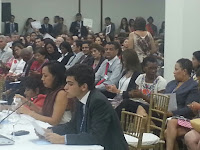 When we arrived at Foreign Ministry building for Santo Domingo, we were herded into a small room and made to wait by officials. Members of the coalition were upset about the exclusion for in nine years of attending the OAS General  Assembly the Coalition has always had the freedom to listen and engage quietly with representative on the Permanent Council about their concern. Officials eventually met us and we expressed concerns about being held hostage in the room and they expressed concerns about the news reports painting them badly. 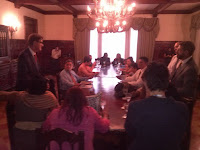 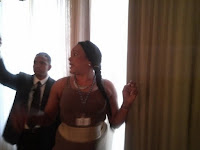 The agreement was not reached without, a transwoman from Santo Domingo contribution to local media from the room window, while we waited for final agreement. The result of that unwanted contribution led to to security calling for four more persons to block the window to prevent persons inside the room from shouting to the media who were directly outside. During the process, they had a security officer take our photos, so we took out our cameras and took pictures of them. We agreed that we would take off our cameras and they would remove their efforts at documenting who was in the room. Fascinatingly, we saw our internet slow down and the air-conditioning cut off while we waited for negotiations to happen. The point made by officials was that there was no space, but the point we made was that they knew exactly how many people would come and that they had the burden of responsibility to planned properly. In the end, it was agreed to let every person in the room plus one person from registered organizations.

Like all General Assembly, the work of the coalition would not be complete without picture taking from Belize and its Caribbean Colleagues who made every effort to reach out to representatives. It was interesting at this general assembly to hear how countries in the Caribbean extended their condolences to the people of the US  about the Orlando Shooting. Jamaica and Trinidad made mentioned of Orlando, but Belize's Foreign Minister Erlington said in his speech,"their pain is our pain, their grief is our grief!" a point as a Belizean citizen, I can appreciate. Other  Caribbean colleagues sought to reach out to their representatives and documented their efforts at engagement by taking a picture or two, or simply asking a question during the Secretary General Dialogue. We did our part in a meeting with the representative of the Inter-American Court, with the representative from Barbados speaking up. 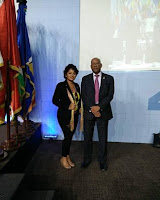 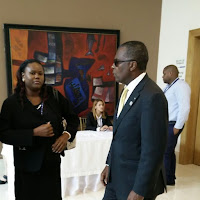 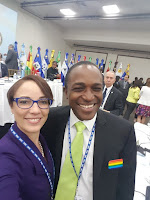 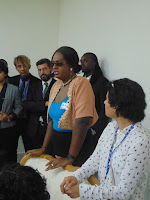 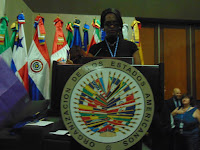 For Belize visibility meant expanding our presence through Zahnia Canul and Tia with her network,  REDLACTRAN. It was a welcomed sight to see her expand her understanding of political communication to strengthen her capacity. Zahnia can be seen here, holding a sign, but documenting the speech and supporting the concerns of her network very strongly at the Secretary General dialogue. I added my concern about tolerance and ensured that I engaged Belize's Assistant Secretary General of the OAS Nestor Mendez whom can be seen side by side with the Secretary General below. 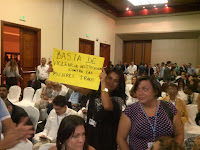 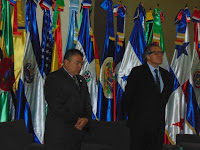