The Perfect, Imperfect Evolution of The Equal Rights Coalition as a mechanism

When Belizean L.G.B.T.I colleagues hear The Equal Rights Coalition (E.R.C.) mechanism, immediately, it generates questions about its value to Belize's national L.G.B.T.I concerns.  When we consider 2,343 trans persons murdered around the world alone in 9 years, according to the T.M.M. 2017 Press Release; 202 murders of L.G.B.T.I people that occurred in Mexico alone between 2014-2016; 445 occurring in Brazil in 2017 and  the 54 murders & attempted murders and suspicious cases (14) adding up to 68. The E.R.C. means nothing to the dead victims.

While states in the E.R.C. may have many human rights issues impacting their citizenry, governance structures like the judiciary, opposition parties, constitutional frameworks have not devolve to exclude L.G.B.T.I citizenry from seeking redress or deny that fundamental rights does not apply to them.  It is under this context the E.R.C  exists as an imperfect  political human rights mechanism on L.G.B.T.I issues. Though its potential to impact millions around the world exists, getting the rights formula to reach that impact is an extraordinary global undertaking. So what is the E.R.C? 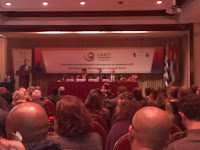 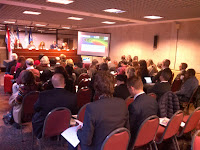 The Intergovernmental Equal Rights Coalition (E.R.C) is dedicated to the protection of the rights of L.G.B.T.I people. It was launched in July 2016, under the leadership of Uruguay and the Netherlands at the Global L.G.B.T.I Human Rights Conference in Montevideo. The E.R.C advances the human rights of L.G.B.T.I persons and promotes inclusive development in both member and non-member countries. With 40 member states, the E.R.C. advances its agenda by engaging with civil society organizations and multilateral agencies. While the ideal is for state to state exchanges of strategies and interventions, with C.S.O involvement being secondary. The reality is, that it is Civil Society that has acted as a driver for social and political progress, not the states. The E.R.C has six Latin America country as part of its membership, with many more located in the Europe and North America. It has created thematic groups under the following areas:
As I look back at the Equal Rights Coalition meeting in Vancouver, Canada, I ask myself, did I just waste five days of my life at a worthless meeting. Randy Boissionault , Special Advicor to the Prime Minister of Canada on LGBTI issues  on L.G.B.T.I announced that Canada will fund $1M peace and stabilization program to support LGBTI people living in global conflict zones. Was it a matter of optics for Canada as Co-Chair, to present an actionable outcome? As an activists, it seems like a cynical last minute commitment that was not well thought out.

But what does this mean in practice? We have seen a signing in July, 2016 of state commitment in principle. We have seen, a Montevideo meeting in 2016 and Canadian meeting 2018. Four pages of recommendations was developed by Civil Society in Montevideo and one page in Vancouver. We have seen a Co-Chair mechanism developed between states,  but not substantial allocation of resources or actionable outcomes. The U.K  recently announced a 5.6 million pound fund to support LGBT issues, but not all the organization who got the money are LGBT led. We have seen the Australians support E.R.C meetings along with regional Commonwealth meetings, but no broader action. This time around, a C.S.O secretariat was developed, but without a budget. Canadian C.S.O's mobilized funds to get civil society participating at the conference. So what was the value of Vancouver?

The meeting in Vancouver was about "a room of updates," that did not get us to a place of recognized actionable outcomes. We were reminded that C.S.O's carry the burden to push governments to act or to express a basic interest in support and that we have no guarantees for automatic outcomes that can be felt on the ground in the years to come. The process is about transforming political mindset which takes years to achieve through civil rights systems that are C.S.O. led at the national level. Interventions include, but not limited to, litigation, demanding legal reform, lobbying, creating advocacy networks and complementing that with a liberation framework which advanced communities concerns across regions of the world over the past 40 years.  How the E.R.C build on 40 years of civil rights efforts, around the world will be telling in the years to come.

In addition, we need some moments of truth telling,while  the .E.R.C offers hope, it offers us all a reality check that inequity and inequality is a generational concern that impacts many groups across all states in the E.R.C. Are we being complicit or pragmatic about our desire for protection and rights defense? For some, as a mechanism, it may be tainted with elements of pink-washing that is legitimized by high level political engagement across states, but for others, its an opportunity for change. For me, asking governments for money opens up the risk of loosing our ability to negotiate concrete outcomes in political advocacy. It may be the reality of doing business at the global level. Smart compromises are in order!

Before the next  E.R.C meeting, in two years will there still be, no money for a secretariat, and demands for C.S.O to work for free in thematic groups We are conscious about the pink-washing habits of states who wish to support LGBT issues, but how do we leverage an imperfect mechanism and make it better? Aside all this, C.S.O. unity maybe obscured by our national, regional and identity politics and "my concerns mentality." Will we continue talking to each other, but not to a room of power to influence, the political leaders, as seen here?

What was missing?  Direct engagement that included a round table event that allowed C.S.O's to ask questions to Co-Chairing countries at minimum. Ideally, there should have been several round tables. Understanding, who would monitor opportunities among states and defined low hanging fruits that could be achieved within two years. We needed to have a baseline of lessons documented to strengthen communication and a margin of actionable outcomes.  How do we define measurements of success after years four of the E.R.C.? How do we solve the content and structure issues in organizing? How do we create or leverage a C.S.O monitoring mechanism that is strategic in adding value to identify global opportunities? I don't have the answers, but I will say, the E.R.C. is 40 years in the making and its Civil Society around the world who have built the E.R,C. political  foundation and acted as a loose accountable mechanism to drive interest around L.G.B.T.I issues. Let's see what the next 20 years brings us.