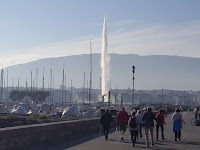 Belize got decriminalization decision On August 10th, 2016, but we did not get government to respect the decision in full. The result, is that the Government of Belize has tempered its effort with a partial appeal, not for legal reasons, but a political one. At the 124 session of the Covenant on Civil and Political Rights in Geneva, the Belize delegation struggled to address the question posed by The Human Rights Council on LGBT issues in the first session. 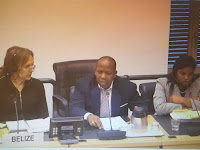 They mentioned work on anti-discrimination, but fail to mention that the cabinet note that was given to them for refinement has been stuck at the Attorney General Office for many months. Granted, the Deputy Solicitor General left in the middle of the process.  They mentioned that there was a comprehensive legal review of the immigration act, that the International Organization on Migration was helping with the review,  but failed to tell the committee if a deadline was set on finalization of review.  A questions was ask if there was a complaint mechanism at the immigration to address denial of immigration request and concerns were raised because there was a section of the law in immigration act that uses denial grounds that affected L.G.B.T tourists, sex workers and persons with disability. One Committee member said," I don't think, I heard any reference to this in your response." She added, " We are very interested in practices, not just the law!" and noted, " We would have appreciated to have gotten a reply to the list of issues before this morning." 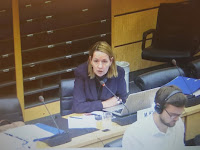 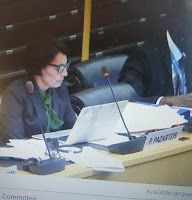 Additionally, when it was asked, "What measures are being taken to address issues of sexual orientation and gender identity. The response to the Mayas concerns defines how that state looked at it human rights responsibility for its citizens. One member of the delegation is noted,"the reporting and dispute resolution framework, I am not able to give any statistics because the framework is not fully functional, THEY ARE STILL IRONING OFF SOME KINKS, and so it has not gotten off the ground as yet" Answered by one of the young attorneys who made up the Belize delegation lead by Ms. Lois Young. I like the ambassador personally, but we must always be able to constructively disagree on governance while using an informed position when serving the best interest of our country. For me the issue of the Mayas, is a simply one, work in good faith to advance solutions which transform lives as is in the best interest of Belizeans.

The separate point was pressed by Committee member Kran who said to our ambassador Louis Young about hate speech. 'You had mentioned, " We are not aware of hate speech!"' Kran replied,"This statement is a concern to us, since we know that the media has published" numerous statements. Calling out the ambassador on lacking awareness of hate speech. She asked the most peppery questions of the lot. A riveting process for a person like me who challenged the state in court around our sodomy law.

Other issues discussed were, the C.C.J ruling on Maya Land Rights, that we had 458 on remand with concern that their rights is undermined by undue delays; Birth registry program which reach 186 communities and reached over 17,000 persons; how Human Services supports juveniles with free legal support; asylum seekers who are registered over 3,000 persons and the discrepancy of requiring persons to apply within 14 days deadline which was implemented in May 2016. They were asked how they deal with unaccompanied minors, survivors of violence and human trafficking; abortion, unemployment rates of women in the labor force which was 3x that of men; conditions at the prison regarding 23 complaints in 2016; how the country has dealt with the operationalizing of persons with disability right to vote and state of emergency issues.

"It's not that there aren't guidelines, or that amendments aren't made, or that is isn't in the Police Act. The problem is that too many police officers (primarily first outcry officers) are corrupt, incompetent, un trained, uninformed, over stressed, under paid, under equiped. The second problem is that there are not enough home country funds to responsibly equip the Police department so even when one comes across, the almost mythical, good police officer, they are met with challenges stemmed from a severe lack of up to date resources for crime prevention. Case in point: Officer is looking for someone they don't know what she looks like? No FB search, no net search on google even - so one month passes. I had to publish a flyer to get a result and on top of that the perp says an officer told her to leave the station when she first turned herself in. #2) A certain Sergeant in OW using the police department foreign funded vehicle to falsely imprison a child. All these have been informed to Professional Standards Branch. I have followed every protocol in the department except legal, and have not had a tangible result - most of these cases, I have either emailed, dropped a hard copy to the Police Department." She asked, "How can we ensure better enforcement of values and laws in the act and guidelines? As soon as I get your email I can share with you our database of Good Cop Experiences as a Human Rights Defender and Founder of Tikkun Olam Belize working in team spirit, solidarity and united vision with my friend Caleb Orozco on the The Belize Human Rights Observatory Project. Again, I wish there were more officers who are Community focused and still madly in love with their job as Police Officers. I know at the very least 2. One am related to and the other is his colleague who gives me hope that under that leadership in the Position he has and any to come, will shake things up so that rotten fruit may fall out. For now, Thank you for what you do and for what more you plan to do to ameliorate the community relations of the Department in an effort to decrease human rights violations." In simply terms citizens pressure is important!
Manage

We make the point at the United Belize Advocacy Movement that it is citizens who pushes the state to do better, it is not for the state to be happy with our approach, but its their responsibility to address the social and economic disparity between citizens. Person's who are in position of influence, power or position will consistently see no urgency in advancing legislative visibility and setting up systems that is accessibility by the voiceless. As citizens we should never be at the mercy of the state, but ensure that we hold the state accountable for not addressing the principle that equal protection under the law, is much about practice as it is about the law. Let's see what the future brings in Belize as political pressure comes to bare on the need to advance equality for all.