Stop and Frisk in Belize: The impact on LGBT Belizeans who are Afro-descendants

On March 1st, 2018, the Cabinet Minister, Anthony Martinez told the media that it was illegal to photograph Civilians. According to the Minister, the Attorney General Office has advised cabinet that police officer must cease and desist from the practice. On 24th June 2019, it seems that was lost on Officers in Georgeville Cayo who handcuffed a member of the L.G.B.T Community in Belize, sought to force him behind a police truck, too his photo  and threaten to arrest him for misconduct. The individual was interviewed and recalled his his frustration.

"I was sitting on the basketball court alone, smoking as always, watching youtube and listening to music, when 4 or 5 police officer pass me, gone to the back asking to searching the areas, i no know what they were looking for.  I put back my earphones in my ear and they pull it out. I was told," I can't have it in!" I tried to walk away and they pulled me back told me to stay. I was told that I could be charged for a scissors that was inches away from me. God knows who that scissors or where that come from.   So I took my ear phone and tried to do a video and the one officer saw me, we struggle over the phone, but I throw it to my sister, then tried to run for the phone, my stepfather grabbed my phone from my sister, and then give it back to my sister to video what happen. So I ask why do I need to stay if you want search the spot. They went ahead to search, found a sixers were I was sitting and ask what am I doing?  I told them its not mine. One officer grabbed me by the arm and I pulled away and the other grabbed me from the neck and told me to relax. There is where I got frustrated and start to get out of his arms, they went ahead and put a handcuff on me whereby I asked them to take it off, caz im not criminal or someone that has a bad reputation and I started to get handcuff from behind my back and they carry me to the vehicle and I did not want to get in the back, so he slammed me to the back of the vehicle trying to lift me up to put me in, he then put his knee in my stomach were I fell to the ground and I sat there for while.

The video shows Stephan that sister yelling "just mek dem tek you picture, da no like yo went any way." This was done despite, the Cabinet Minister getting advice, its illegal to take take a civilian picture along with their personal information. In speaking to a lawyer, the term" looking suspicious" can mean anything to any officer and the stop and frisk practice of the police department violates the constitutional rights of many citizens. The idea that a young effeminate gay man, who is sitting alone is racially profiled, suggested that while Belize may have gotten its independence in 1981, the masters who upheld the divide and conquer principle did not leave, they simply changed their color.

It must be noted that our young black, gay brothers can expect to be disproportionately be stopped and frisked as many times as the police wants as it is assume that their wide investigative powers have no limits by citizens and government agencies alike in the system. What ordinary citizen would dare question our put a brakes on police powers? Even after being stopped at least 10 x by police officers.

Are our young black gay brothers becoming collateral damage in the name of crime prevention? We know the police looks for person between the ages of 16-30, black, usually in slippers, braids or three quarter pants, but these days tight pants and black seem to be a thing. Despite what the COMPOL of Belize says, having gay officers working for you is no guarantee that homophobia in the police department is not a problem.

Of note, PC Ralph Gillett was slapped in the face and told, " I no want any battiman next to me!" what happen next was an unsanctioned cholkehold, an officer slapping him in the head why unconscious and a slap that triggered a blood shot eye. 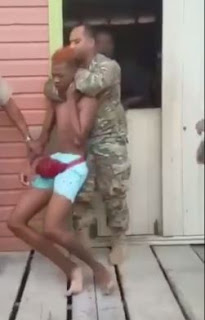 As the Executive Director of The United Belize Advocacy Movement, I met with The Commissioner of Police to highlight  the lack of natural justice,  procedural issue in investigation. His reply was the way the officer conducted while on the island and off duty. In addition, he offered for us to review the development of a draft LGBT policy on detention and treating victims of violence through their policy and planning unit. Is the subject of the Officers over, no, we shall see what time brings?