The LGBTTI, Fundmentalist clash, CARIFLAGS presence at the OAS in 2013 Strong

The United Belize Advocacy Movement has been going to the OAS attending Latin American and Caribbean meeting since 2007 shaping the Coalition declaration statement and lobbying CARICOM leaders to support or dialogue on Sexaul citizenship in the Caribbean. As a coalition we have been able to pass five resolutions between 2008 to 2013 with lead support of Heartland International. We met at the Royal Palace in Guatemala City for two days to strategize on the coalition declarative statement and plot out our course of action for the week and next year: 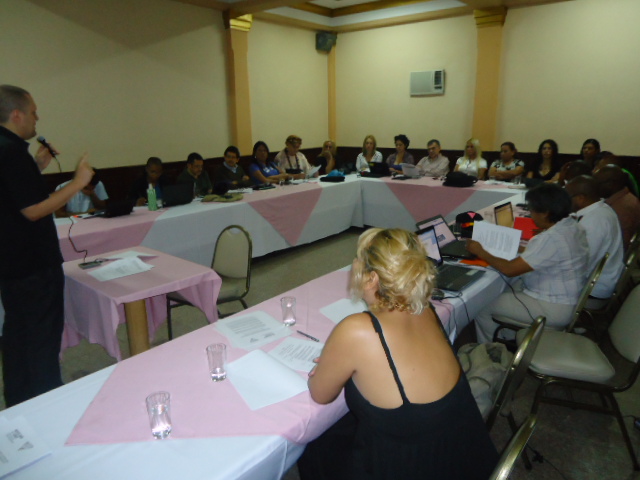 Of note, the Coalition held half of its meetings in Guatemala City and drove as a group to Antigua for the OAS Civil Society Dialogue, meeting with other coalitions like Drugs, Sexual and Reproductive Rights Campaign to chat about strategy and at a meeting in Antigua  where we were able to meeting not only the campaign, but the US Alternative Mission Representative  Mayra Ahern to chat about language access, and providing technical assistance to help CARICOM countries understand the needs of its L.G.B.T citizens better. This meeting took place in Antigua,Guatemala on June 2nd, 2013. 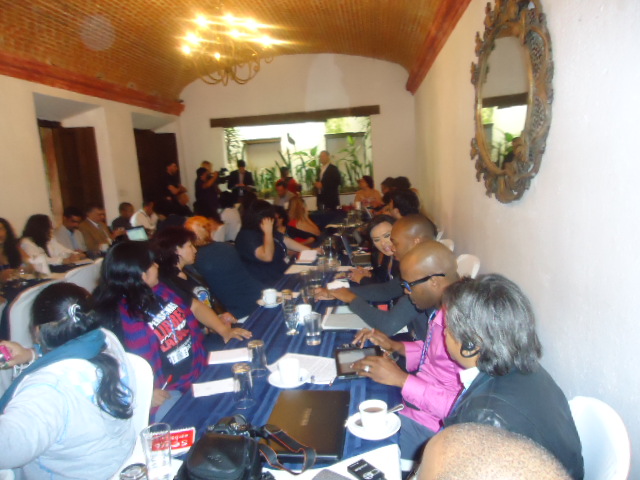 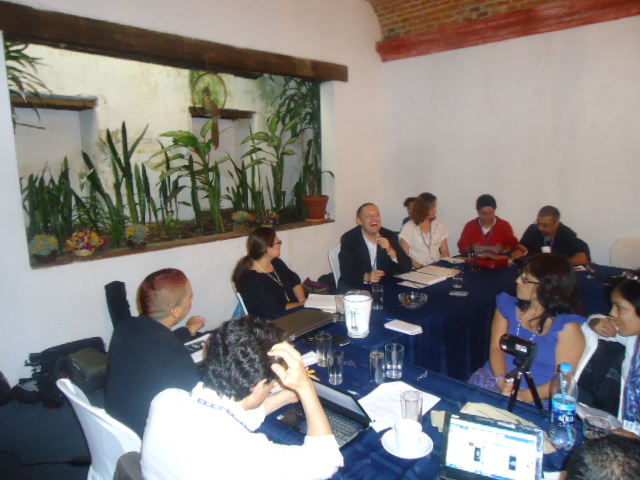 I must report however, about the first moments at the Civil Society Dialogue  on June 3rd with accredited Civil Society members and their engagement with  a Venezuelan politician who was allowed to speak in a Civil Society space seen on the left  that started a a loud chant against his presence. 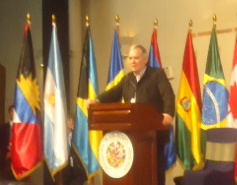 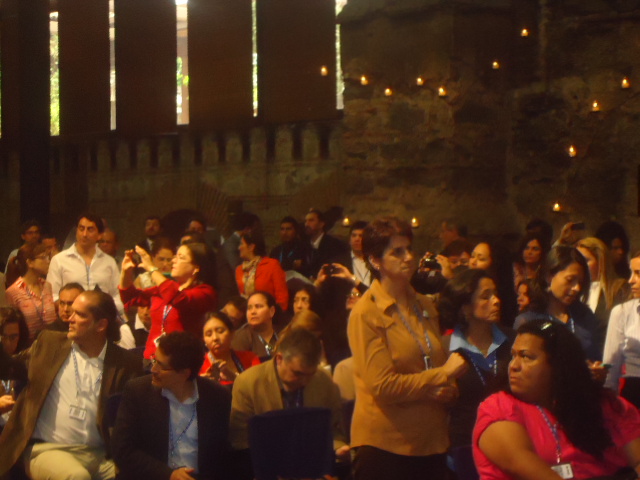 Well! a  group of 20, stop the politician in his tracks with one person yelling , " insufficiente, tiempo a compania" as a chant. This fellow, on the left, started the chant, out of concern that the politician was taking  up the time of Civil Society  in an unfair way. The LGBTTI Coalition realized that he was right and we began to chant Civil Society Dialogue. The result was that the gentleman left, but not before the group of 20 left in protest that the presence of the gentleman meant that the spirit of Civil Society dialogue  was lost. Well! that did not stop there, as the English speaking Caribbean was isolated from bad translation services and invisibility during the question and answer session with the Secretary General. So the head of CARIFLAGS Secretariat Colin Robinson of Trinidad and Tobago wrote a sign that said, "English Questions too" which I promptly held up till the Secretary General saw it and pointed out to the moderator to call on us. 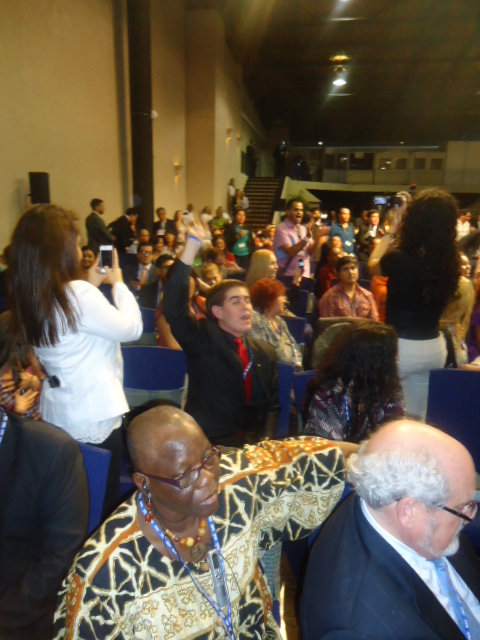 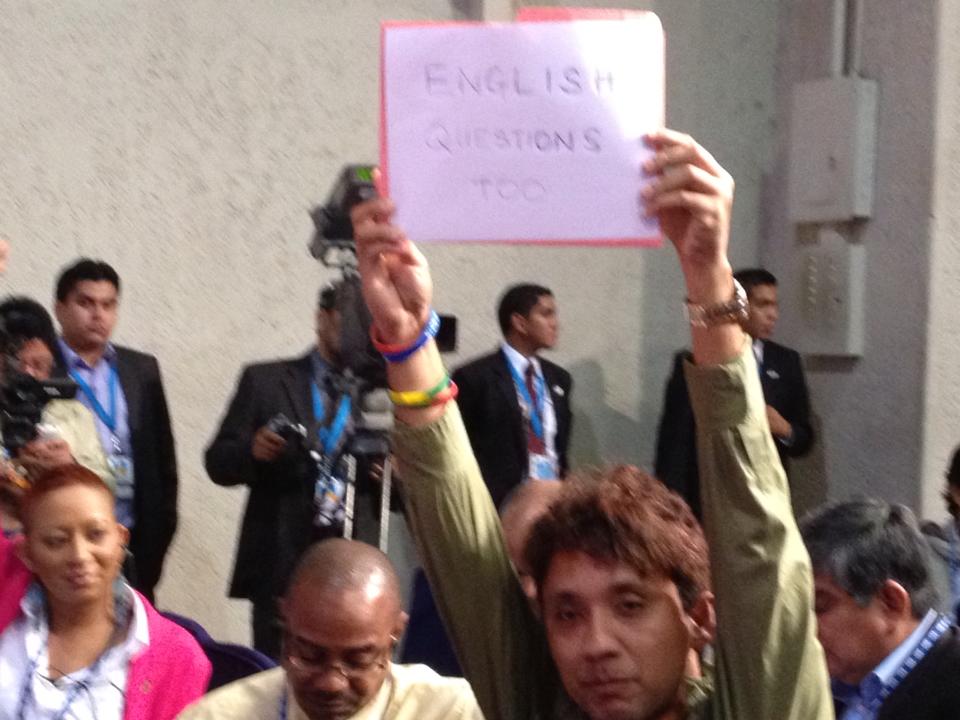 As part of of the hemispheric Coalition the network members from the Caribbean (CARIFLAGS) represented Trinidad and Tobago-Colin Robinson, Jamaica-Jaevion Nelson, Belize-Caleb Orozco, Suriname-Tienke Sumter, Guyana-Zenita Nicholson and St. Lucia-Daryl Williams. We spoke of the possibility to engage our leaders through different mechanism and the opportunity to engage a minister or two at the next meeting in 2014 which maybe in Paraguay. We engage Assistant Secretary General Albert Ramdin of Suriname (seen here in the right) who gave me his card to follow-up on how we can access CARICOM spaces to build high level political dialogue. 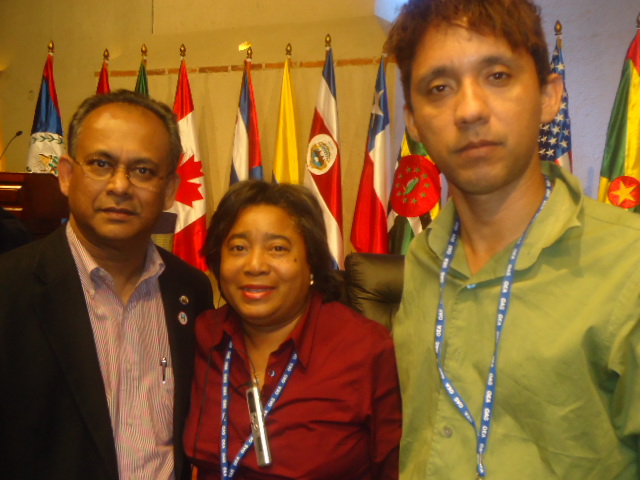 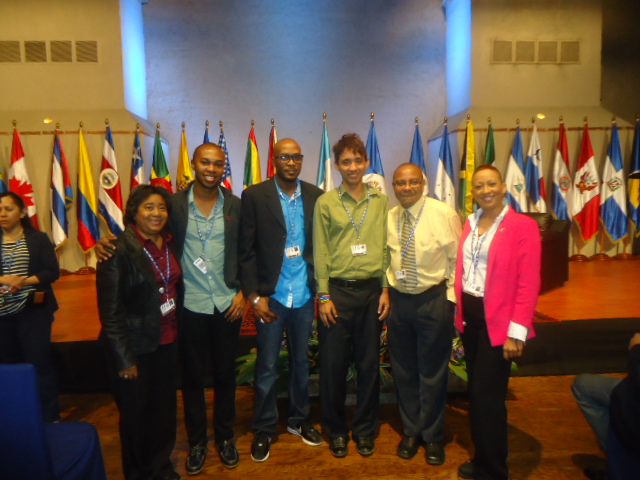 Representative spokeswoman for CARIFLAGS Guyana, Zenita Nicholson, spoke on our behalf and asked two questions one refer to the need for language access during the meeting and to response to our question given to him in Bolvia to note any basic follow-up action. We still did not get  an answer and so Colin Robinson, grabbed the microphone and respectfully asked that he answers our concerns. It was our proudest moment as a region. Though the Secretary General said alot, but said nothing, at least he answered us. 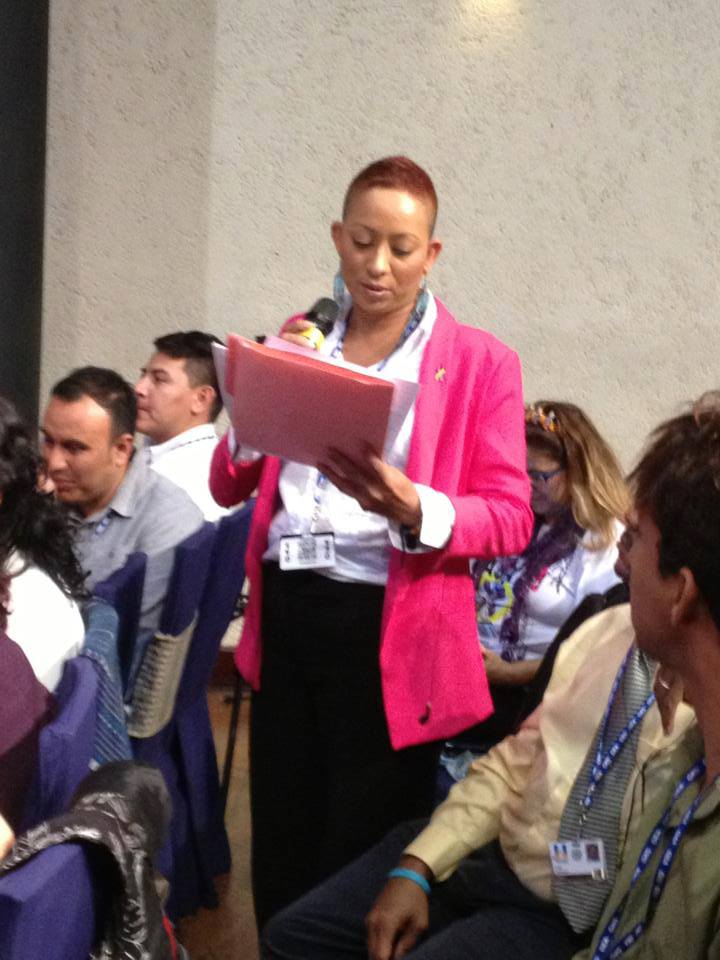 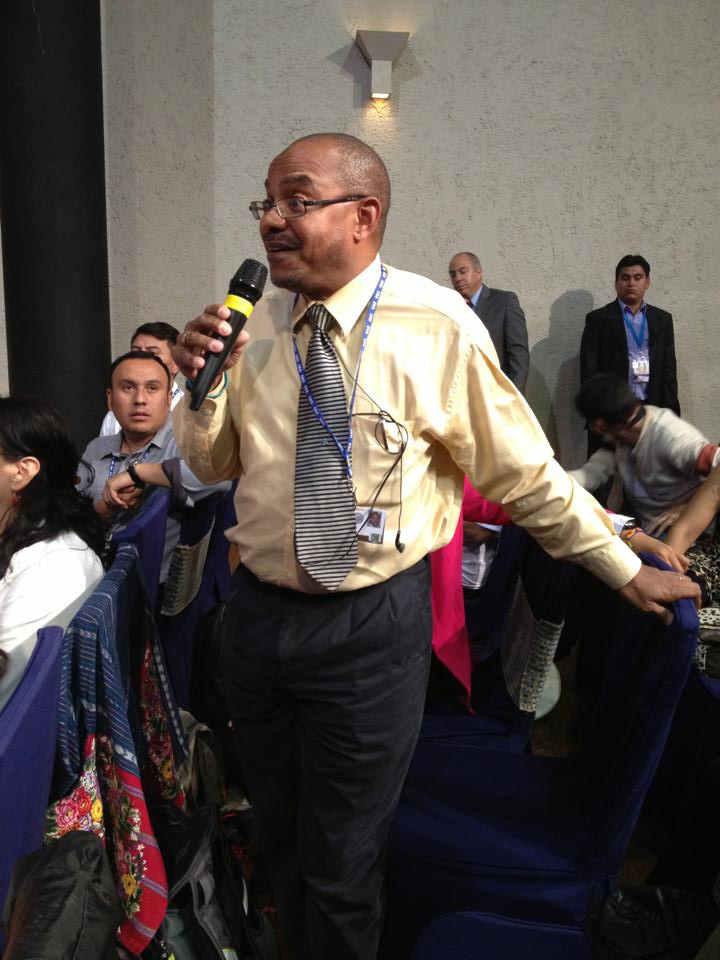 In 7 years of engaging the process at the OAS, I have never been riveted by Civil Society  assertiveness of its space, exercising their right to expression, drawing lines of rights protection, not restriction at the Civil Society negotiation session to determine who would be the five Civil Society speakers. At this session the International Director of External Affairs was forced at the end to take the issue to his boss. What was interesting was that the Fundamentalist Catholics group was given a space to speak, but not before they pissed off Feminist groups, Sexual and Reproductive health activists, anti-abortion groups and the Afro-descendants groups who discovered they were racists as well and we would have none of it. In addition, The LGBTTI coalition was told by the fundamentalist group who is founder of the Family of the American Foundation ,Mecedes Arzu Wilson ( she is the former President of  Guatemala Sister and wife of a US Republican) that they did not want to talk to us. May I say that set off activists in the room that pissed off the Coalition who pulled up  a chair and we immediately started to dialogue.  Three long hours of talking took place, of which, one and a half hour was a shouting match. I realize we weren't getting any where, so I intervened and got Mercedes to agree that violence against gay people was wrong and the need to uphold dignity was important. It was Zenita of Guyana who stayed the course and found out that Mercedes believe that a there is no such thing as a mother life being endangered by a baby, in fact she said," that does not exist." Jamaican-Jaevion Nelson added his two sense as well. What I did was to learn her name, and who she was through a book she wrote where she truly believes that contraceptives causes cancer, that gay men started AIDS that condoms are not good. It was riveting to learn as well that her group trained sisters across the Caribbean including our own Seeds for Life group located in Benque. We learned too that she had a congress representative in Guatemala and so she would eventually get her way. Not before realizing how manipulative they were, they claimed in an audience of almost 300 people that we intimidated them that they had consensus on a document to make their statement as speaker. Well, we immediately discredited that claim that as a coalition we had not agreed on any document. 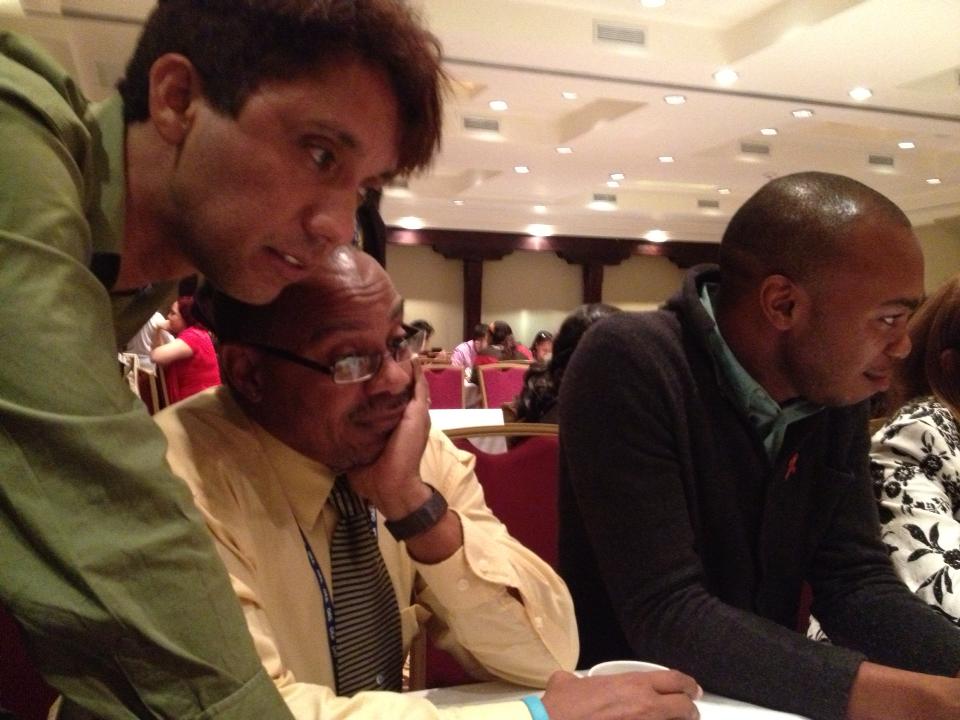 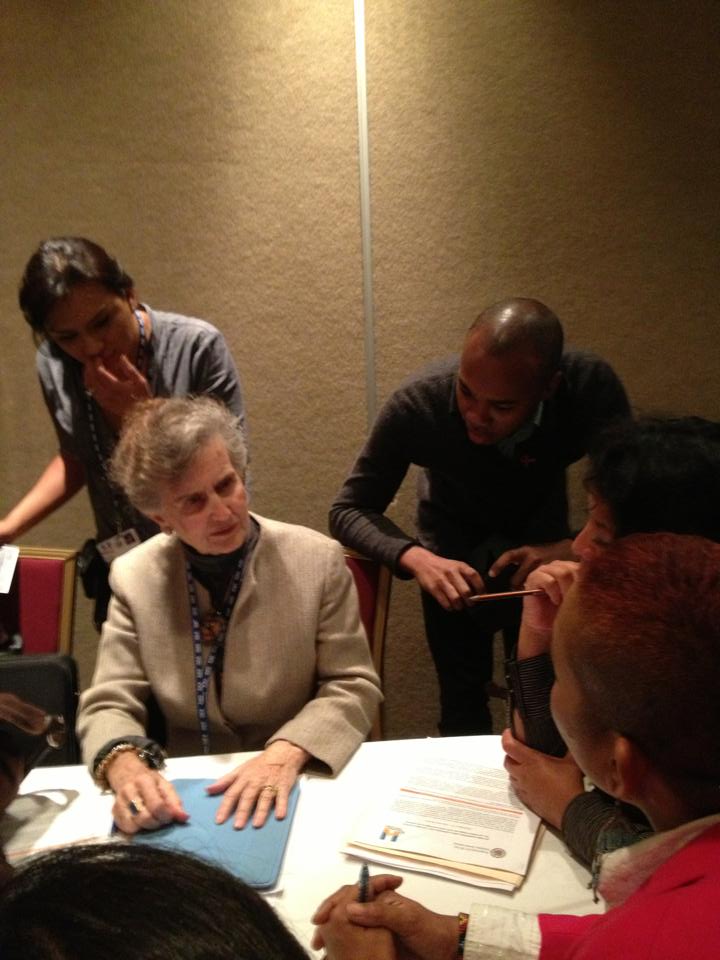 Well the drama did not stop there as our coalition friends agreed that if they were chosen as speaker we would turn our backs on them while holding up the Conventions to be adopted because the OAS is space for rights protection not rights restriction. The following day at the speakers sessions. Many from our coalition did just that, as they spoke on the restricted definition of the family. We just wasn't going to have them speak and not show our disagreement. We agreed to ensure that all would me mentioned in each statement and to cross-pollinate our message in solidarity. 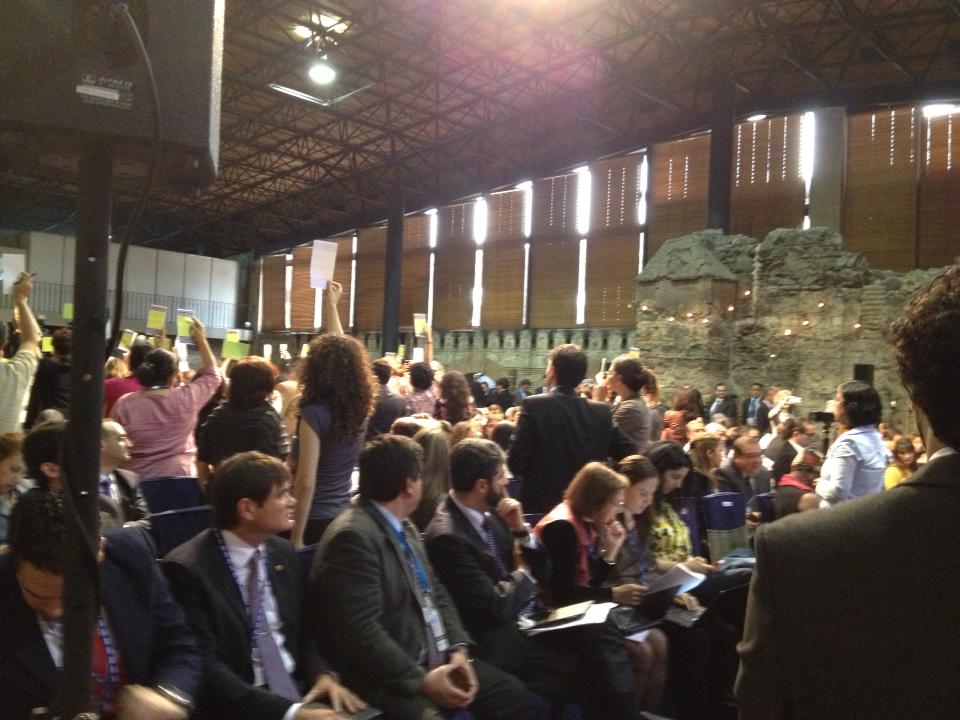 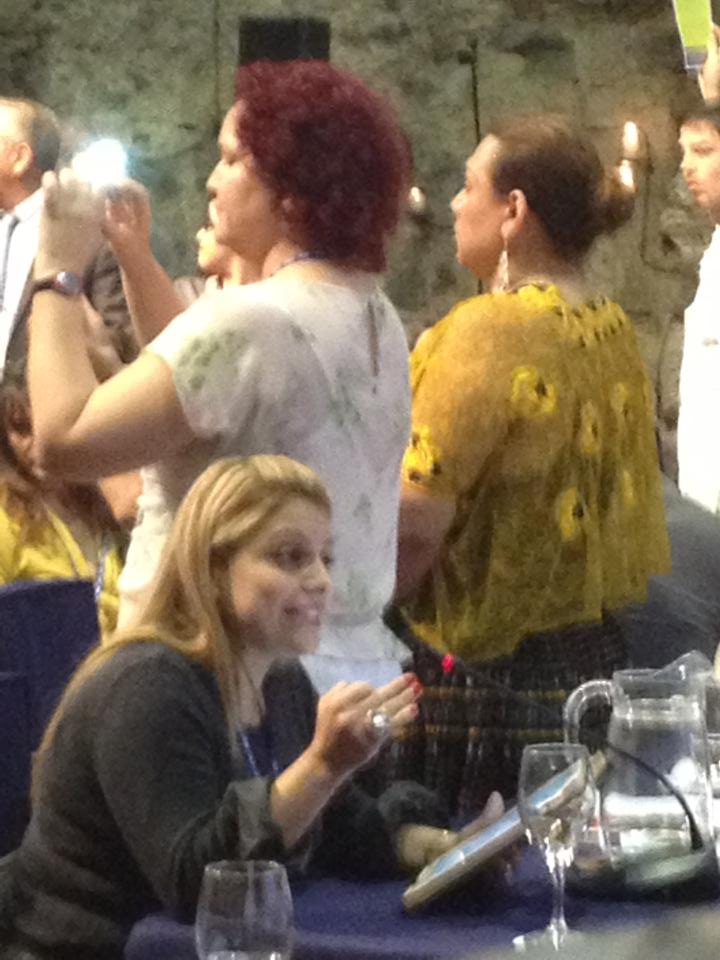 Their declaration, scene here about the Family is cause for concern for its what fundamentalist have been pushing at the UN level here Russian was able to push a resolution on traditional values that goes against the rights of ordinary Citizens. As a network of the Caribbean CARIFLAGS support Sexual and Reproductive Rights and showed its support by raise the leaflet as their group read their concerns. 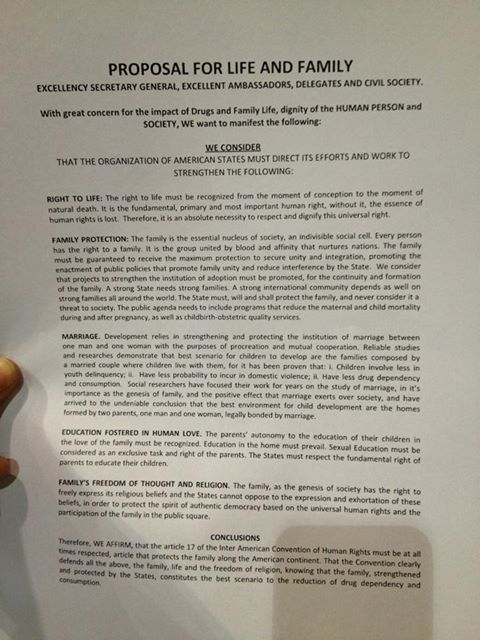 We sought to make a point where rights are threaten, it is important to stand firm on principle. Where women's rights are threatened it must be defended. There is no place on the restriction of rights base solely on moral grounds in  countries where there is democratically elected representatives guided by the constitutions fundamental rights and freedoms. 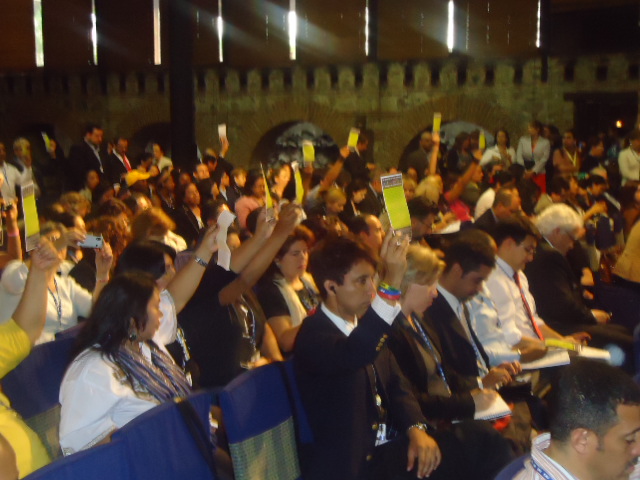 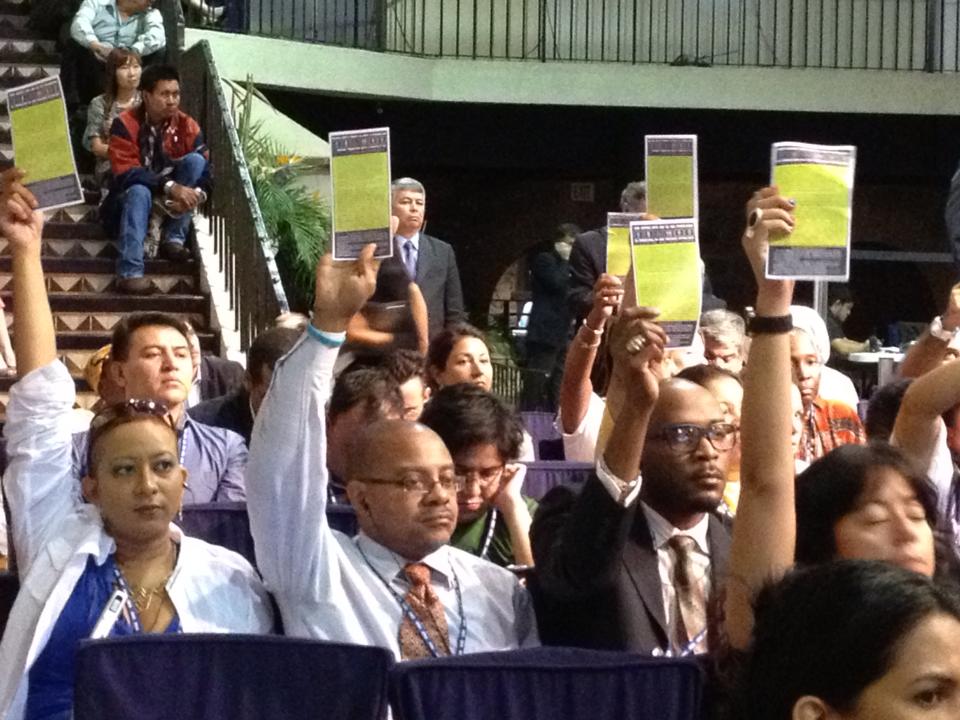 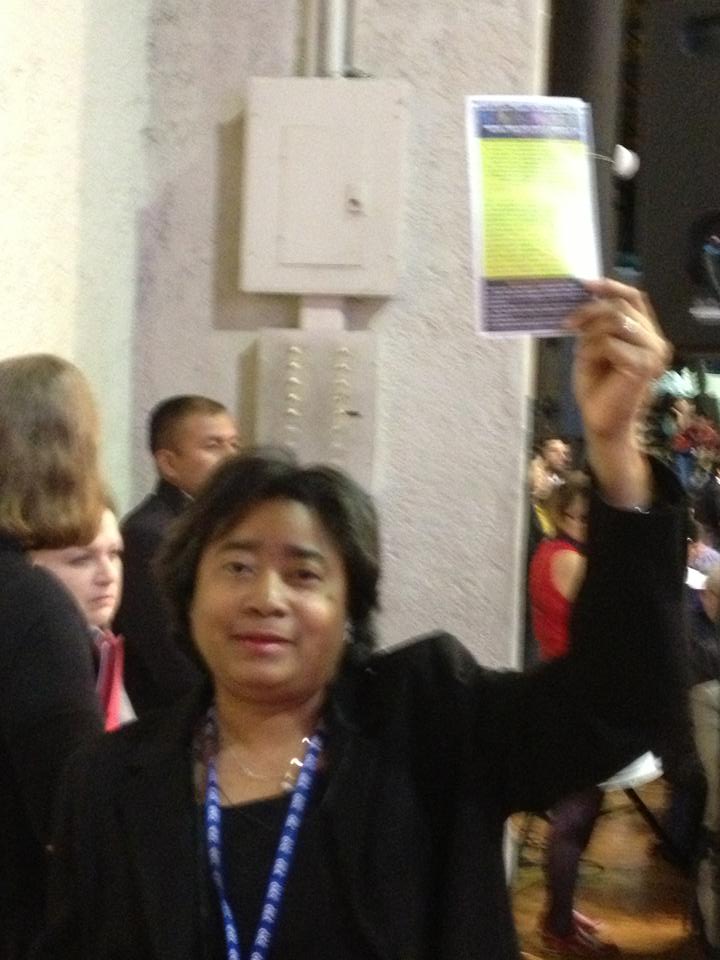 We ended the day engaging Bocchit Edmond Alternative Representative  of Haiti, Honorable Patrice Nisbet of St. Christopher and Nevis, the Jamaican Ambassador, Trinidadian, Dominica's   and Antigua 's representative along with Belize's Foreign Minister and ambassador and head of the L.G.B.T Unit for the OAS Victor Madrigal who told me that they had approved precautionary measures for me about a week ago. Even got a meeting accidentally, with Jules Vasquez who did an interview with me on the spot at Santo Domingo Hotel. I met Mercedes again, we shook hands, she invited me over to her side, but not before asking, " Were you one of those who turned their backs while we were speaking." I replied," Mercedes, its just a natural part of the process." And I then added, "lets agree on something, we did agreed you had a right to speak and so did not interrupt your statement." Smiling, I left in preparation for my trip back to Belize. Here, I learned that Belize, Jamaica and Barbados was giving some trouble on the Sexual Orientation and Gender Identity Resolution, after some further engagement around the region, which was not a guarantee of success, I heard at 6:05pm our resolution was adopted. Amen to that news and I screamed in relief.