On 21st September, the Prime Minister of Belize, in his independence speech acknowledged that there was a culture war between traditional values and religious mores. The statement reflects a new era of understanding  in Belize about the value of good governance. It also comes at a time when, government has experienced pressures from the Belize National Teachers Union, scandals triggered by an Auditor General Report about passports, accusation that Ministers were associated with a dubious character named Danny Mason who was arrested for the alleged beheading of a Pastor, Lands department scandal, protests from fundamentalists and opposition party. In his speech, the PM said,
"the .... recasting of the categories of sexual and gender identity, and the claims that human rights include LGBT rights. Not surprisingly, the Chief Justice's Section 53 ruling detonated a societal pitched battle in which traditional values and religious mores are in a fierce offensive against liberalism, secularism and the arguments for evolved Constitutional protections"

While, the Belize National Teachers Union public relations department issued a press release without membership consultation on August 24th, that called for, " BNTU appeals to the PM to “…ensure that this matter, which is of paramount importance to our teachers and to our vastly Christian nation state, is thoroughly ventilated and addressed.Our people must be allowed the opportunity to openly express their concerns and opinions on the issue and the possibility of an Appeal process before it is brought to the House of Representatives.“ and ends "for the sake of our children and nation we urge that this issue be treated as a matter of national importance."  Interesting enough the B.N.T.U was calling for good governance that included an 8 point proposal. They proceeded to advance their call with protest for close to two weeks. 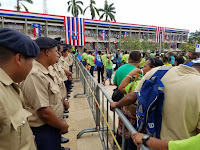 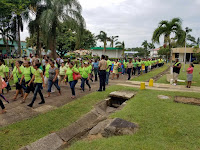 "Governments are elected to office with the core responsibility of defending and preserving the rights and values of its citizens.... failure to react...clearly brings to light .. that the ill will of a few are being forced down the collective throats of the masses..“.. as tax paying citizens of this democratic nation, call on the Government to act ..... we insist that the Government of Belize appeals this decision all the way to the highest court...“we pledge our support to the Churches  and we call upon all Belizeans to stand in solidarity in defense of our country’s moral values for our people...”


We learned later that the Union membership were not consulted in the drafting of this press release either, but PlusTV was the first to air the Utilities Unions reaction to the Chief Justice ruling  about the unconstitutionality of section 53. Interestingly, the Belize Communication Workers Union mission is "To fight and oppose unfair labor practices and discrimination in whatever form or content." Lost in the release of all the Unions was the understanding that the case was about adult privacy, not children. Lost in the Union releases was their understanding that constitutional morality is what governs our democratic nation and its diverse people, not individual belief or morality. Of note,in  1981, Belizean supported rights were for all and that the state is required to address the social privileges and economic inequity between citizens. Some how fundamentalism created, exceptionalism about our fundamental rights as citizens base on sexual behavior rather than as human beings or even citizens. The point was made clear by Scott Stirm who said on September 16th, 2016,""We are talking about human rights for humans. Gay rights are for gays..., you talking about special rights for one special group of people."


Despite the preamble to our constitution and government obligation to protect all its citizens, government proceeded to support the idea of a Morality Commission which was a reaction to the decision on section 53 on September 9th, 2016.The reason for the commission," to in fact look at issues having to do with public morality and its role in our society, having to do with the institution of marriage and safeguarding that institution. Government believes, it's a shared position of all of us that marriage is between a man and a woman."So on that same day, I spoke about being invited to the Commission table, " If it's a process of building peace and understanding and its value about building peace and understanding, we will be included without question."

Out of concern for the impact of the Morality Commission and proposed discussions to amendments the constitution to define sex and male or female and to define marriage as one man and woman, a slew of meetings took place, with the Minister of State, within the Ministry of Finance, The Attorney General Office, the Deputy Prime Minister, leader of the opposition and others to neutralize discussions or find a pragmatic way forward. The results of the meetings started with The Deputy Prime Minister in local news coverage reminding the media," the Commission does not have the power to make policies based on the church's position; it only will have the ability to advise the Government on what course of action they should take..," and continued, "Faber added that personally, he would want to see the minority groups get more than an opportunity to dialog; he would want there to be some mechanism to address their concerns." While the PM did not sit down with the community, access to his Deputy Prime Minster and others became the alternative route to communicating our concern.


The largest contingent was when we had a meeting with the leader of the opposition. One point made during the meeting was, "if government abdicates its legal obligation to address the needs of all its citizens equally, that such a position will promote vigilantism and discrimination, but more importantly, will amplify the fundamentalism view that constitutional rights are to be subsumed and replaced with oppression and marginalisation." Another point shared was that it was important to ventilate the term sex in court. Nevertheless, it was a pragmatic point that the Government of Belize eventually agreed to along with examining the point of freedom of expression in its partial appeal. We managed, nevertheless to share information about our human rights concerns and the broader issues of sexual and reproductive rights as well. Participants both allies and community members shared their concern. A request was made to do a meeting in October, regarding further engagement work. The leader of the opposition agreed to the tentative month of October.

Of note, we learned the National Evangelical Association of Belize (NEAB) had its application dismissed on October 4th because it was not a party to the original case and it submitted the wrong documents to the wrong court. The irony in its submission, is that it was asking that the Claimant pay its cost directly, but the Chief Justice instead told them they owed the Claimant $750 along with the Attorney General Office. Of note the Roman Catholic Church submission asked for similar court cost, despite the fact, that its them appealing the case in its totality while the Government of Belize is only doing a partial appeal. Time will tell, how that requests evolves.


Where do L.G.B.T Belizeans fall into the framework of Good Governance promoted by the Belize National Teachers Union? Do the press releases reflect the official position of members in the Teachers and Utilities Union? Is fundamentalism taking over our governance structure? Is unconstitutionality of section 53  going to be respected by the Roman Catholic Church and others? We simply don't have an answer. Section 53, nevertheless, has become the one major tool to turn religious tradition on its head that it not longer has a right to promote impunity with automatic entitlements to discrimination in its institution. Will it be constructive and reasonable in accepting our right as citizens. Only the Universe has an answer! We fight on, nevertheless!

Let All Voices be heard
http://www.7newsbelize.com/sstory.php?nid=37697&frmsrch=1