I had two cool parts to the event, the first was meeting Dutch Foreign Minister Bert Koender and discovering the down to earth nature of the man while waiting for Vice President Biden at the door to the hall. Koender made me feel me l so at ease while waiting for Vice-President Biden that I was comfortable enough to speak to Biden sister for a few seconds. I learned latter, the Dutch Foreign Minsiter had passed or near through Belize once, years ago.

The highlight of the event for me was meeting Vice President Biden, I had asked Outright International to see if it could happen. It was down to the wire and a last minute arrangement.Also thanks to the Foreign Minister Koender of the Netherlands who said, " come, stand with me here and we'll meet Biden together!" And so that's what happened and that led to me meeting Biden in the Hall way with a couple persons taking pictures.

I was drawn to the man because of how he spoke about his son and family. In an interview in 2015, the article said,"Beau’s mother and younger sister were killed in car crash in 1972, which badly injured the young boy and his brother Hunter. Biden Sr brought the two boys up while commuting daily from his home in Delaware to his job in the US Senate." Biden shared a conversation he had with his son in a military hospital, later in the interview, where his son said, " ‘Dad, sit down, I want to talk to you.’ He said, ‘Dad, I know how much you love me,’ Biden recalled. “Promise me you’ll be all right, because no matter what happens, I’m going to be all right.” He added, “I feel like I was letting down Beau, letting down my parents, letting down my family, if I didn’t just get up,” Biden said, his voice trailing off at points. “You’ve just got to get up.”I can relate to his son death from cancer, as I have my own sister with stage four cancer. Each time, I see her cough, hear her breathe with a whiz, see her crawl on the floor to the bathroom, I know we are crossing the bridge of life together. Then I see her spring up, ready to move the dirt drums, driving my car to help me do my errands, shouting and expressing her annoyance at her husband and I become surprised and her will. . She said once, "I am not ready to go yet!"And I said, "its your choice on what you want to do."This was a conversation in mid 2016 and so we fight on, she, for as long as her heart and body will last. And I, as  I buy her pain killers, her pills to stop her bleeding, her booster shots to build back her blood and make sure she has snacks like Tostados sauce and Nacho chips.   So I spoil her, over the years, we traveled to the state of Quintana Roo once with my mom in 2015 for New Years, traveled to San Ignacio to take a bathe in the river and even took a ferry, in the Spanish Lookout with her husband to try and find gellato ice-cream.  We got lost instead. Recently, I took her and her husband to San Pedro to ski and dive. She did the diving part and I did the club part and slept all day, as I needed to get away from a city that was just making me sick from news of the Morality Commission, the partial challenge of section 53 and all the quarrels that simply got people crazy, including me. If it was not the kind words of Special Envoy, Kim Simplis Barrow. I would not have remained grounded. 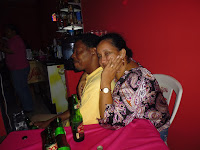 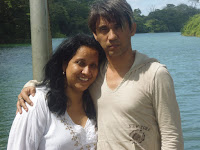 In this work, politics waits for no advocate. Good opponents, PlusTV, sought to propagandize Belize's presence at the UN with the report, " Caleb Orosco asks UN to tie LGBT agenda to their Trade, Development and Technical Assistance to Belize."The actual speech, spoke of, "if you have a relationship with the Government of Belize --- whether through trade, development, or technical assistance --- please use your access and voice to support our struggle." The speech did not call for conditional aid policy. this small fact, did not deter Plus TV from deliberately lying the Belizean Public. A practice it has upheld for the last six years against the litigation of section 53.


To my surprise, the Belize Delegation was at the UN as well, and issued a statement. I immediately emailed the Director of Foreign Service with the Legal Documents filed by government against section 53 to ensure that she knew of the specifics of the filing and asked for the Foreign Ministers Speech in which he said, "The national debate on social issues took a precedential turn recently.  A high court ruling held that Section 53 of our Criminal Code which criminalized consensual sexual acts between same sex partners is unconstitutional.  The ruling also expands the definition of "sex" to include sexual orientation.   However, in response to the request of a not inconsiderable segment of our population, our government has launched a limited appeal to the judgment challenging only the expanded definition of “sex” by the High Court." In the spirit of constructive engagement, I sought to share that the government was doing a partial appeal on sex and freedom of expression. Here they are at the UN in 2016. 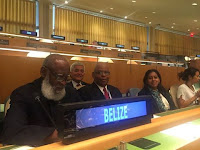 I also had the good fortune to meeting the Global Special Envoy on L.G.B.T issues Randy Berry in New York and the always considerate, Jessie Bernstein of the US State Department. We spoke of engagement processes with faith-base leaders and strategies for reducing conflict. What was clear in the conversation, is that L.G.B.T communities have global systems evolving that are slowly developing to support systems of support at the national level. Still, many will have to flee their states, dies, be imprisoned, killed or accept discrimination until the political environment changes. Belize remains lucky for it is not Saudi Arabia, Iran, Sudan or Russia. We have never had civil wars or acts of genocide. We do have hope that change is possible through the 68% of our citizens who are tolerant our accepting. But we have to make investments and build systems that promote justice and is accessible to all with limited resources.  If we don't, that 68% could easily be reversed to intolerance with the help of fundamentalism of the National Evangelical Association of churches of  Belize. 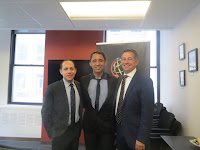 Did I have a goal to the UN Side Event Headlines, it simply to raise the profile of Belize's decriminalizing process, to acquire new knowledge of support systems seeking to scale up political engagement at the UN and it was to meet new people in the work. I met with donors to explain the value and timing of their support, I met met with donor activists to understand their history and strategies. It is clear, Belize has alot to do, with expectation of faster and better, but it must first deal with its fundamentalists opponents who out shoot through media ownership, access to institutional spaces like the Unions and is able to use an intersectional message that plays on collective prejudice and simply ignorance about human sexuality and rights.  With all the protests that happened on August 23rd, 26th and in October for close to two weeks by teachers that ended today October 19th. I remain strong in the belief as I said at the said event,"Today, my family is my greatest defender, but one day soon, I know it will be my government."