The United Belize Advocacy Movement is and advocacy organization that uses a rights-base approach to reduce stigma and discrimination. In its quest for advocacy, it can be said it is vocal, efficient and use of technology have helped to intensified its message, national dialogue and effect on the national psyche. Below is a summary approach of how things have been done so far.

Activism through Communication Infrastructure: Social networking has been a powerful tool, Belizean's for the Constitutional Challenge, Pride Belize, Belize Gay Community, Se la vee have all played a role in disseminating information when newspapers like amandala kept us out of their circulation. It has allowed us to communicate in safety and engage opponents to the point that debates on facebook ended up generating over 3,000 comments and forcing Belize Action to do a close group. Social networking is cheap, fast and impactful as it even allowed channel 5 to pick up a story that was in a London newspaper, without a phone call. I estimate that we reached an audience of 5,000 persons between all the groups that exists, but if one adds individual listing its even more globally. We have even seen our opponents monitor facebook to help to reframe their messaging.

Wearing symbols as political statements!:  The UniBAM wristbands and the We Are One Launch! gave communal action life. We produce 1,000 bands, but the impact was donations, wives and husbands wearing it, persons in the Caribbean region, the US, Africa asking for it, lesbian women owning the band among others. We have gotten reports that the bands are being stolen at a high school in Dangriga among the young people; it triggered a free ride at the Corozal junction. We have received reports of experiences of  individual saying, " UniBAM instead of battiman over and over again. Allies and LGBT may not march, but they will wear a band. A logo was created by the community along with promotional ideas for free. In-kind contributions have been numerous. The impact goes on an ona 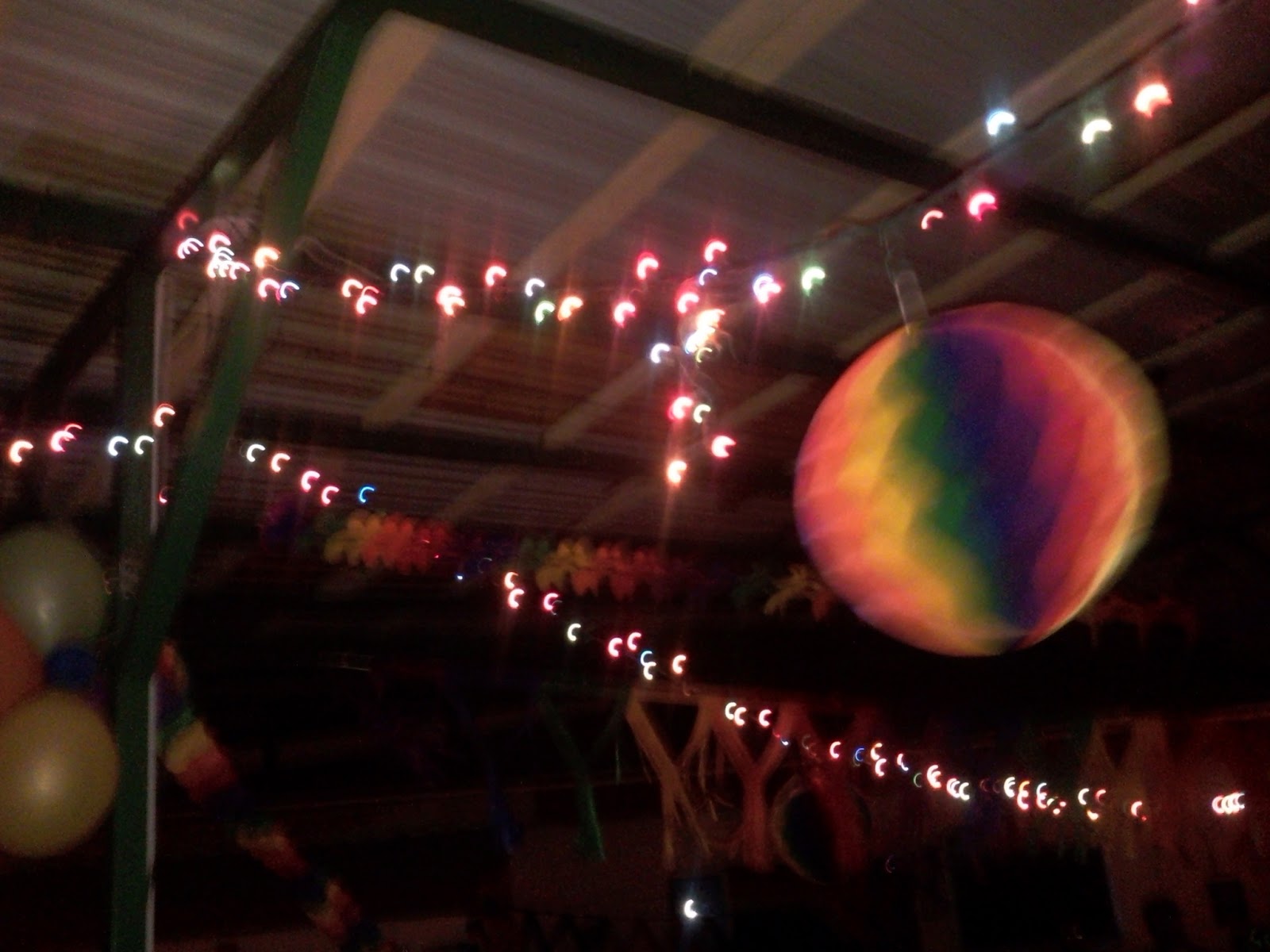 Quiet Diplomacy as political action: The community organized two pride parties around a central location, plus a Halloween bash, while psychological, they create a space to assert freedom of expression, association and movement. They allowed engagement between journalists and activists, it allowed for community to have it say in a non-threatening environment. It showed the power of the community collectively and although we have our fears, we have the power to create a safe place to party and have fun. Symbolically, if  we used that collective power to do good, we would be one powerful political voice in both parties.The process has inspired the development of a trans pageant organizer for this year, pageants are powerful statements that the L.G.B.T community have visible allies who are silent, but present and that they are not extremists in their views. We have seen Allies engage the church system adding value to the process.

Public Education through Cross-messaging: We have done national dialogue on Gender-base Violence and L.G.B.T Human Rights on July 24th, 2012, participated in the Purple Movement walk on crime and violence in Belmopan, participated in Dr. Ivan Garcia Walk against crime, conducted sessions on human sexuality with B.D.F., Allies joined  the Jasmine Lowe candlelight at battlefield park and shared meals with the homeless. They have appeared on TV to demonstrate visible support; Angela Gegg allowed us on her Show on Krem Radio and later an editorial was triggered "UniBAM divides Belize!" We have always seen HIV as an important space.More and more the system is looking at guiding principles of non-discrimination and acknowledging diversity and human rights principles in policy documents.

Think Locally, but act Globally! We have ensure that rights enforcement concepts are integrated into any new policy development such as the current strategic plan for HIV in the national response. We have worked with LAC allies and Global Rights, back in 2007, then switched over to Heartland International Alliance and continued our work at the OAS General Assembly, countering the Vatican representatives effort to undermine S.O.G.I resolutions from 2008 to 2012. We have worked on ensuring Belize supported the UN Resolution on Extrajudicial Killings that included Sexual Orientation and Gender Identity (S.O.G.I), circulated the joint UN Statement on S.O.G.I issues and have ensured we did shadow reports for the Universal Periodic Review in 2009 and the International Covenant on Civil and Political Rights in 2013. We network with CONGA, entered Global list like I.T.P.C, rectal microbicides, L.G.B.T SOGI list, commonwealth law, OAS LGBT google groups,cflags,UNGASS to be engaged in the global  and regional politics of advocacy.

Communal War is waged peaceful: We have seen persons inspired to tell their discrimination experience;persons willing to report on a conversation at a policy meeting; persons offering donations to implement a lesbian workshop; persons offering their home to do group sessions;  persons offering PR advice and helping to map allies in the system; designing logos and offering to write articles in the newspapers. We have seen training occurred around discrimination; teachers calling and student wanting information on section 53 and L.G.B.T Human Rights work; individual calling certain media personalities and persons engaged in dialogue with the church on a sustained basis. Wearing wristbands in church and shaking hands with opponents.We have inspired the group Everyday People in San Ignacio who are an independent group seeking to build community confidence. Individuals essentially have acted as community monitors proactively being the eyes and ears of the response to garner support.

We have sought to reclaim the public message, and reframe the debate, its now about reminding conservatives that their accusation of L.G.B.T rights advancement damaging the families being an inaccurate position. Our work  is really about strengthening family relationships and securing stability of the family. For us the current position of our opponents only divides families, by forcing families to choose to express  conditional of love. We say that the current Christian position of love the sinner, but hate the sin, is hurting families, not helping, and that such statements divide, they do not unite a community in the grips of crime and violence.

Legal Advocacy: Challenging section 53 was about giving life to the fundamental rights and freedoms for L.G.B.T citizens in Belize. It recognizes that social debate in an intrical part of cultural change, it allows for hearts and minds to evolve and it allows society to test its governance structure. It requires a communication plan that is flexible and a legal team that's regional. The simultaneous strategy of legal and social dialogue cannot be planned, but can be managed. We borrowed the strategy from the US and Latin America, but its the Caribbean that drives this approach with a goal to perfecting the process in the region.

The debate around section 53 have allowed us to recognize the trans formative process of section 53 in pulling out the issue of Fundamental Rights and Freedoms out the policy closet. COLA, the PUP, the UDP, the Churches are being challenged to take a stand whether for us or against us. Over 100 articles have been written about the issue in various forms, 50 on Belize News alone. We are demanding that the state do its job of ensuring that there is no disparity between citizens and for it to recognize that moral position and votes cannot triumph their job of doing the right thing. We have naturally evolved in letting our opponents teach us a thing our two about communication and analysis of our work. without them we would not have a national debate, a clear legislative agenda and could not have imagined the possibilities. We have assess the women's, labor and political rights movement in Belize to teach us about what to expect in community building, defining political currency and messaging. Where opportunities avail itself, is where the movement follows to fit into its message and increase support.

The Next Generation: New leaders

We recognized that its the next generation that will finish the work, so we must cultivate the capacity of young people to envision greater legislative change and to use their access in parliament, between the parties, in the private sector and among media personalities and the upper class to strengthen the process. We see them as calling for equal treatment under the law and more spaces that are inclusive. We see them ensuring gender equity and ensuring the state carry out its mandate of addressing policies that addresses social disparity between citizens.

Whether discussing sexual and reproductive health and rights in the health system or at Universities, the process allows for community engagement. Each time a teacher asks students to write a paper or a student decides to write a paper, it allows for social reflection and dialogue that act as secondary communication sources of action. Whether HIV, Global Fund, Gender Equity, Crime and Violence, Sexual Abuse, party evaluation of national budgets, or a workshop on care and treatment or sexual violence, it allows for the humanizing of a population that engages and educates the system about itself.


The work continues, the interest continues and opportunity continues. It may be the younger generation who will finish the work while the older heads figure out their place and allies impart institutional history. Old networks will be used and new networks will evolve as time passes. The key is to led a core group of folks in the community push things forward, while the others support behind the scenes. For its clear, rum and parties as a main vision in the community is not longer the only vision, the status quo for legislative and cultural change has been challenged, now we need to see the effort reach the end of the journey with a look to address the hearts and minds of all involved.